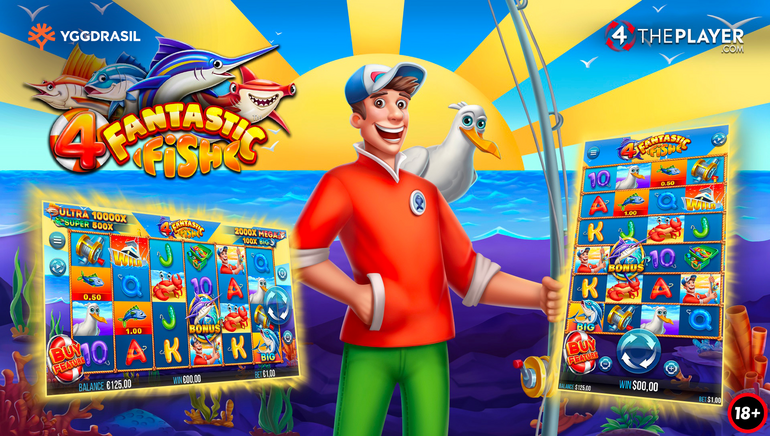 Yggdrasil and 4ThePlayer have teamed up to release a new fishing-themed slot called 4 Fantastic Fish with amazing game mechanics.

Yggdrasil has its fair share of the games and slots dedicated to fishing enthusiasts are not in short supply. The deal with 4ThePlayer has led to the release of 4 Fantastic Fish across the entire network of casinos powered by their software. This new slot has thousands of winning ways, a high return to player, and a massive maximum win, so all the ingredients in the recipe for success are there.

4 Fantastic Fish is a great-looking game and an instant hit with fishing enthusiasts that appreciate slots with high maximum winds. The top payout depends on your stake, but the amount is limited to 15,000 times the bet, so there’s a lot of money to go around. The game has 4069 ways to win and six reels, with a cool Respin bonus feature providing the chance to claim lock and collect cash prizes. You need at least three and a maximum of six scatter symbols for the bonus rounds to be triggered.

Scatter symbols are particularly important in this game, especially during the special Respin bonus round. While this feature is active, the scatter symbols will stay in play, and symbols depicting fish will also lock in place. At the end of the bonus round, all the value symbols will be paid, so there are extra winnings to be claimed. This is also the chance to cash in on multipliers, as a shark appears whenever a reel fills up to deliver extra winnings. The round concludes when no fish appear for three rounds.

The Respin bonus is the most anticipated moment in the game, but not the only one that matters. Punters can jump straight to this stage of the game by purchasing the feature for the equivalent of 75 times the stake. Throughout the game, a giant squid can pop up to rearrange the fish symbols across the reels and boost the odds of creating winning combinations. When the Big Game Jackpot Fish lands on the six reels, players can win one of the fixed jackpots called Big, Super, Mega, or Ultra.

Yggdrasil’s state-of-the-art technology GATI powers the 4 Fantastic Fish, as well as many other games in their portfolio. This makes it easier for partner casinos to implement the game, which has the potential of being one of the biggest summer hits. The decision to add a modern twist on a classic slot has paid off and 4 Fantastic Fish shapes up to be a great choice for new players and experts alike.