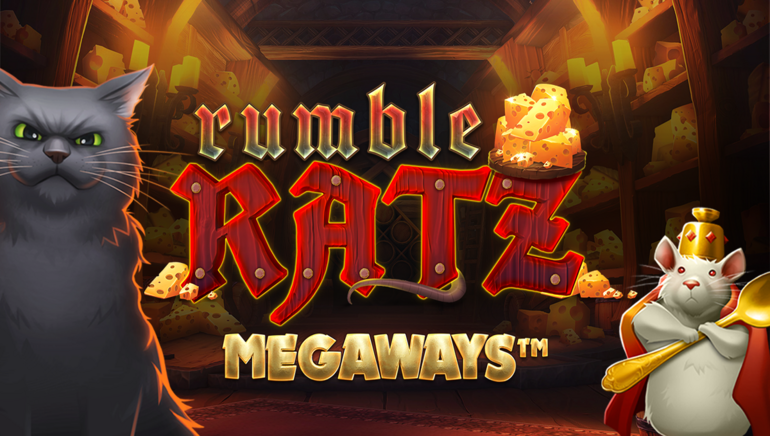 Rumble Ratz Megaways is a new slot from Kalamba Games, where rodent chefs cook up features such as respins with multipliers and a varying number of ways to win.

Kalamba Games bring cartoon characters to online casinos with their brand-new Rumble Ratz Megaways slot machine. It's a 6-reel game with a dynamic number of ways to win, and comes with thrilling features such as respins with multipliers of up to 10x.

This desktop and mobile slot has a cheerful cartoon style where various rats in a kitchen appear alongside playing card emblems, and a cheese wild symbol that can act as others to complete combinations across the reels. A frustrated cat stalks them from the background, and there's a real sense of fun throughout.

Under the Megaways system, the number of ways to win can vary, although players always have a minimum number of 4,096 different paths to land wins. Blocker tiles at the top of each reel unlock in stages if special K-Cash symbols appear below. These also increase a multiplier that pays out if all blockers vanish from a reel.

Scatter symbols trigger a free games feature, with an initial 3 respins. The respins counter resets to 3 each time a K-Cash symbol removes a blocker tile, which also increases a win multiplier to a maximum of 10x. The round ends with 3 consecutive spins where no new K-Cash symbols appear, and all accumulated values are then paid out.

Customers can pick HyperBonus options to trigger the bonus games right away. Rumble Ratz Megaways is a high volatility game with average returns of 96.21% and a maximum win potential of 5.000x the stake. It's available now at approved online casinos.

Founded in 2016 and based in Malta and Krakow, Poland, Kalamba Games provide content to many popular real money and social casinos. Their games are all proven drivers of revenue for clients, and the company is run by industry veterans with both B2C and B2B experience, as well as a strong desire to bring the best of social casino to the RMG vertical.

Alex Cohen, COO and Co-Founder of Kalamba Games said ''With a host of engaging features, changeable reel sizes thanks to our innovative use of the Megaways™ mechanic and a huge max win of over 5,000x, Rumble Ratz MegawaysTM is sure to be a big hit with slot enthusiasts around the globe.

“The entire team worked hard to deliver a new twist on Megaways™ with Rumble Ratz still being instantly recognisable as having Kalamba’s stamp of quality attached to it.”