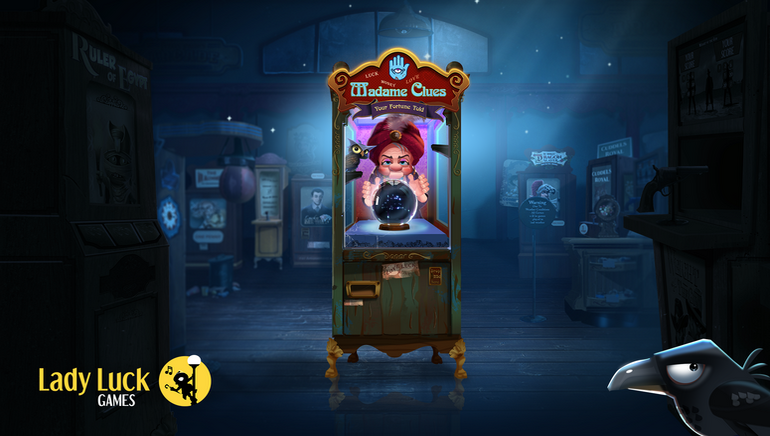 Madame Clues is an unusual slot machine that's just been launched by Lady Luck Games. It has a single reel. Owls and ravens trigger special features from a fortune teller.

Lady Luck Games has just launched a highly inventive slot with just a single symbol position in the base games. Madame Clues uses high-quality animated images and plays out in a crystal ball, overseen by a fortune teller in an abandoned arcade.

Despite this straightforward premise, Madame Clues comes with an array of extra features, such as splitting symbols and free spins with multipliers of up to 128x.

The mysterious animated figure of Madame Clues peers into the crystal ball on each spin of this desktop and mobile game. A single hand, cup, crown, or coin can appear, awarding prizes of 1x, 3x, 8x, or 12x the stake respectively. If a skull appears, it means no win.

The unusual gameplay takes a new twist if a raven appears, as it triggers a Look Deeper bonus round. Symbols split into 4, and this can happen up to 3 times, turning a single-position game into one played out on an 8x8 grid.

Owls also have special powers. If one appears in the crystal ball, players claim 3 free spins with a guaranteed win of 2x the bet. If the clairvoyant summons further owls during the free games, the feature retriggers, with the multiplier doubling. It's possible to end up with a total of 21 spins with a 128x multiplier.

Madame Clues hits online casinos on 11th January 2022, and we predict a bright future for this exceptional game.

Based in Stockholm, Sweden. Lady Luck Games launched in 2014, and has since developed a small portfolio of slots found in many popular casinos. The experienced team create slots with a focus on the gameplay and design. Using the latest technology and in-house skills, combined with a solid business sense, Lady Luck Games seems to have a bright future.

Other hits from this studio include Total Summer Bliss, Valley of the Muses, and the cat-themed Cuddles Royal.

Mads Jørgensen, Co-Founder and Chief Executive Officer of LL Lucky Games AB said: “We’re thrilled to kick-start 2022 with such an innovative slot release, a lot of time went into developing this and we’re confident we have something truly special on our hands.

“We’re developing games with the new generation of online slot player in mind, and this title gives them something that’s unlike anything they’ll have ever played before. Now it’s down to them to step up to the crystal ball, take their chances and reveal their fate.”