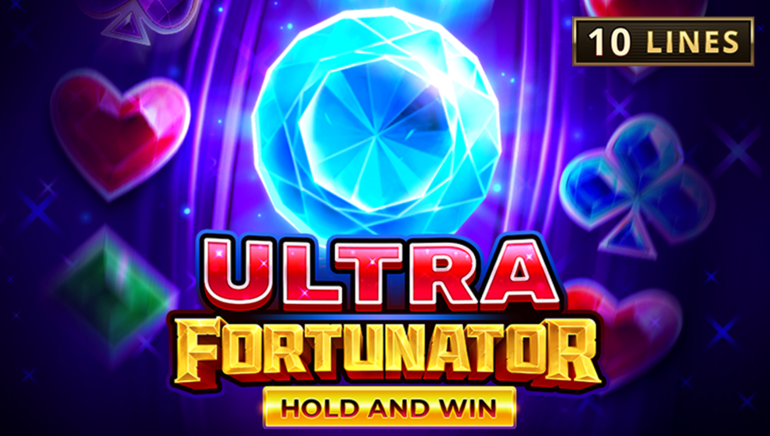 The Ultra Fortunator: Hold and Win online is a brand-new title from Playson. Dazzling gems, sparklinmg 7s, and golden dice feature in this feature-filled game.

Playson announce their latest desktop and mobile slot with the release of Ultra Fortunator: Hold and Win. It's a colourful game filled with iconic symbols and features guaranteed wins from an exciting respins round. Players could even scoop jackpots worth 1,000x their stake at the end of the feature.

It's a 5-reel, 10-line game with medium to high volatility and average returns of 95.55%. The design sees each symbol sparkle across the 5x3 grid, with jewelled playing card suits and red 7s sharing the reels with golden bells, dice, and BAR emblems. It's a dazzling sight that helps the Ultra Fortunator: Hold and Win online slot to stand out across PCs and mobiles.

The features shine just as brightly as the graphics. Jewels can land on the middle three reels at any time, and players need at least 3 of these to launch a fantastic Hold and Win Respins game.

The triggering symbols reveal money values and lock in place for at least three respins, and if any new gems appear, the spin counter resets. Unlike most respin rounds, new money symbols don't stay fixed in position but instead pay their values, plus the values of the triggering gems, before dropping off the reels in the following spin. This means players can collect multiple prizes throughout.

Mystery Gem symbols are the only ones to stay in place, and these reveal their values at the end. They can even hold Mini, Minor, Major, and Grand jackpots worth of 25x, 50x, 150x, and 1,000x the total stake, respectively.

Malta-based Playson is a fast-growing provider of slots and more to some of the top casinos. They operate in around 20 regulated gambling markets, with their games available across casinos operated by 140 partners. As well as Malta, Playson has offices and studios in the UK, Romania, Hungary, Taiwan and Greece and operates under the terms of multiple licenses, including those from the UKGC, ONJN, HGC, with a recognition notice from the MGA.

“We’re always looking for ways to improve our product offering and provide more entertainment to players, with the new central-reel feature giving fans a terrific prospect.”