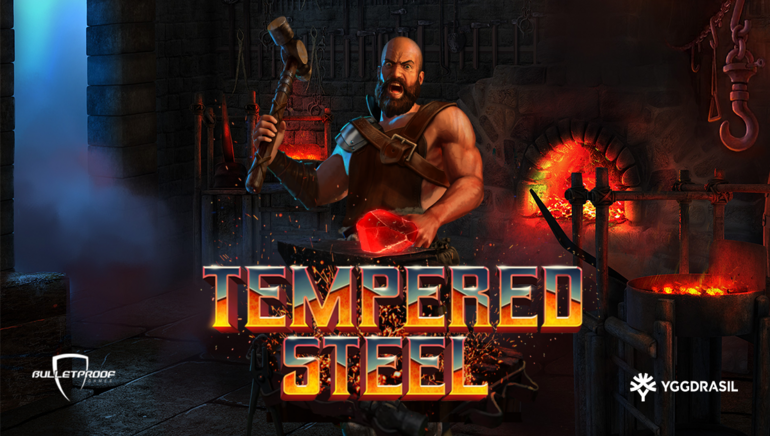 Yggdrasil and Bulletproof Games have teamed up to produce a blazing new slot, Tempered Steel, set in a forge and lit up with stunning graphics. The slot includes several base-game features and a Free Spins round that can be retriggered.

Yggdrasil and Bulletproof Games have teamed up to produce a blazing new slot, Tempered Steel, set in a forge and lit up with stunning graphics. The slot includes several base-game features and a Free Spins round that can be retriggered. Players who want a change of scenery from the typical sports and animal-themed slots will enjoy Tempered Steel.

Tempered Steel is a 5x3, 20-payline slot with an RTP of 96%. The minimum bet is €.2 and the maximum is €100. Symbols include lower-paying card suits and higher-paying swords, hammers, axes, and fierce-looking blacksmiths, the latter of which act as wilds. Axes are the highest-paying symbol, rewarding 40x for five-of-a-kind.

During the base game, the blacksmith can act as a wild. If his tools randomly heat up and fall into the barrel, steam will rise, resulting in a random multiplier. This, in turn, triggers one of three features:

Lock and Spin locks stacked wilds into place as a respin happens. If a reel remains unlocked, players get an extra spin.

Bonus Frenzy adds fiery scatters to the reels, improving the chances for players to trigger the Free Spins round.

If Forge Your Weapon is triggered, players can smash a rock three times in order to uncover a weapon, which then appears stacked on the reels.

When three or more bonus symbols land on the reels, the Free Spins round is triggered. This is the round players want to be in! Wilds appear on the reels for the duration of the feature, the number of which is determined by how many scatters trigger the Free Spins. On each free spin, one of five forges may be ignited, which adds a wild to the reels.

The round ends when all five forges have been put out and all the wilds have moved off the reels. If the forges are randomly reignited, the round continues.

Some jurisdictions offer a Bonus Buy option, which allows players to pay 100x their initial bet and go straight to the Free Spins round.

Tempered Steel is the newest slot to join the Yggdrasil’s Masters portfolio. The program, which was launched in 2019, is a content partnership designed to empower up-and-coming gaming studios and distribute their games through the Yggdrasil network. So far, more than 11 studios have participated in it.

Wondering if Casino Bonuses Are Really Worth It? Learn When Taking Advantage of Them Can Be Worthwhile